Boobies & Gannets
These are large to very large seabirds, with long, tapered bodies, long, angular, pointed wings, pointed tails and dagger-like, pointed bills.
They feed by diving into the sea for fish. Only one species is regularly seen in the UK but a few other kinds are found, mostly in tropical seas, around the world.
Most are largely white, with black on the wings, but one species is mostly dark brown. They breed in colonies on cliffs and islands, some tropical species nesting in trees.
For more information click here

Cormorants & Shags
Large, dark water birds, in the UK just two species, one essentially marine, the other found on all kinds of waters. They are long-bodied, quite large-tailed birds, with broad wings and long necks, and a general form somewhere between divers and geese.
They have short, thick legs, showing a relationship to gannets by the fact that webs join all four toes. Their bills are thick and hooked at the tip, helping to grasp fish, which they catch by diving under water.
Characteristic behaviour includes standing with wings held half open. Many other species are found in seas worldwide.
For more information click here 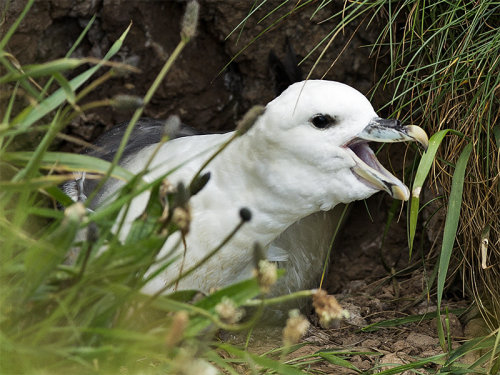